Everything from original vintage Marshalls to reissues.

i saw them last week, they were touring with blackfoot, we got 2 headline bands for the price of 1!!

i agree they are very good.
Top

did anyone realise that they are using the original for a show in a couple of weeks? one off chance before the sale from what i heard!
Top

the OEI and Clay's site are excellent. that's kind of how i've figured out which model 50 watt i have. still not a hundred percent sure but pretty close.
Welcome to the BootyRanch.
Top

what happened to the detail on the hendrix amp, antone have it?
Top

I have some pics, notes and a schematic from the JTM45 group I can send around. Better be on broadband though......

i see there is a new Amp launched by Marshall based on the Hendrix one. cool!
Top

hey george, after browsing the above site, I wonder why you don't stock Obsolete Electronics transformers.

I received 1 of 5 prototypes of the first 50 watt plexi-spec OTs (probably still have it) that was hand wound by Stephen Delft. I was immediately sold and became OEI's biggest advocate. Shortly there after I took over the shipping of the 50 watters. Approximately a year later we introduced the 100 watt plexi OT's and roughly one year after that the 30 watt Vox AC30 OT's were incorporated into the product line.

Interesting side note; The 1st 100 plexi-spec prototype still resides in a Voodoo Modified JCM800 2203 owned by Alex Perialas of Pyramid Sound Studios and has been on countless albums over the years).

Joe worked a day job that demanded a great deal of time. Approximately 4-5 years ago Joe and his wife started a family. Joe chose to focus his free time on his family (rightly so) and quietly closed the business.

Though opposed my many at the time I was of the first techs to be vocal regarding the fact that all transformers are not created equal and the impact on the tone as well as feel was substantial. At the time this was met with a great deal of opposition by well known techs (dismissed a myth). Fast forward to present day and this information is almost common knowledge. There may well be posts that reflect this in the achieves of the Ampage (www.firebottle.com). Interestingly enough OEI started as a co-op of sorts with the main intent of bringing better tone to DIY'ers and players alike. The concept quickly grew into a business and the hand wound transformers were replaced by computer wound transformers (I prefer the tone of the hand wound transformers).

For those interested;
A few months back I came across 2 or 3 50 watt OT's that we pulled from amps. They function perfectly fine and if anyone is interested we sell them for $40.00 each (Reg $110.00 new).

We also have the last 4 hand-wound single-ended OT's made by Mr Delft for the AX84 forum (back when it first started). These were wound in April of 2004, the secondary has 4, 8 16ohm taps and this info is was hand written by Mr Delft on the transformers (see pics). We used to use these all the time for mods/upgrades for Fender Champs, Vibro Champs, etc until we were no longer were able to acquire them. They sound amazing and could use a good home where they will be appreciated. We paid $75.00 per tranny including over-seas shipping/customs fees however we are happy to sell them for $40.00 in the hopes they will go to a good home.

There also used to be a lot of great people/techs who frequented the Ampage in the early days of it's inception (IE: Bruce Collins, Paul Cochran, Marc Cameron, Kevin O'Conner, Randall Aiken, Dave Stork, Richie Hall, etc) and nearly all of which have gone on to form their own amp companies. The camaraderie of the old Ampage reminds me a lot of this forum (very heart warming).


Merry Christmas to all!
Trace 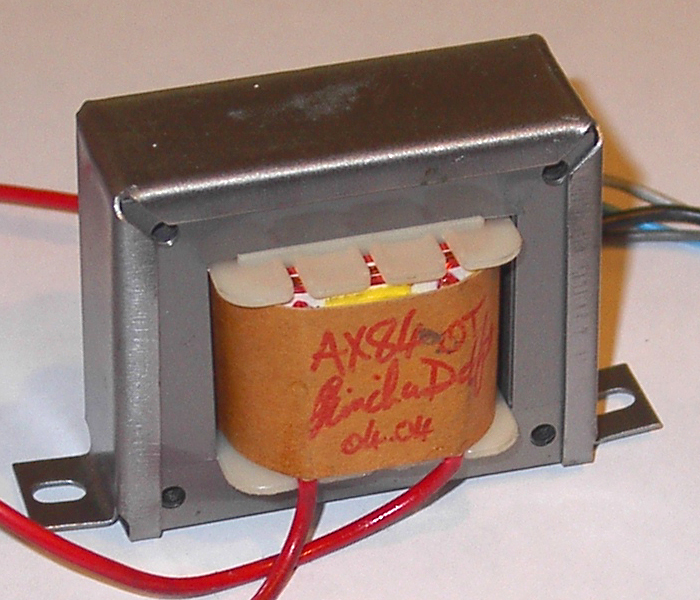 Trace Im a fan of OEI tranys but sadly I dont have any anymore. Too bad you cant get them Id love another 100W.
Top

I used a few OEI's also, and thought they were very good. I tried for awhile to buy enough from him to use them exclusively but didnt hear much back from him.
www.reinhardtamps.com
Top

Trace Im a fan of OEI tranys but sadly I dont have any anymore. Too bad you cant get them Id love another 100W.

If I had a 100 watt OEI OT Billy I would most definitely offer it to you. I was not only a honor but I was also proud to be a part of OEI as it brought tone to many.

I used a few OEI's also, and thought they were very good. I tried for awhile to buy enough from him to use them exclusively but didnt hear much back from him.

I myself was not in the know on that my friend (see above regarding the company closing). I have not yet had the pleasure of playing on one of your amps but I have heard good things. Happy holidays to you and I hope you have a great New Years Eve!

Apologies, some how there was a double posting

Does any one know what happen?
Top
Post Reply
42 posts