Info for maintaining and tweaking your amp to perfection.

ledvedder wrote: ↑
Sun Dec 31, 2017 11:22 am
The more that I think about it, I'm not sure if my Chupacabra really needs a ppimv. A lot of folks are telling me not to bother installing it.

I suspect they are correct.

The only reason I considered it was to be able to crank the preamp in plexi mode.
Top

This is the reason, why people put in a PPIMV at all
The fault almost always is sitting in front of the amp

Question on PPIMV - Nik at Ceriatone and I were talking and I showed him the diagram for the Rich Mod II PPIMV w/ PEC dual pot (pic below from Valvestorm). He said his was a Lar/Mar. He also said:

"Ours is like that, but there are no longer 220K resistors on board. If you still have those resistors, then the effective resistance would not be correct. In our PPIMV, the 220K resistors would be moved, to be replaced by the pot. The diagram is wrong, it is meant for a cathode biased amp (like an 18W TMB). For fixed bias, the pot wont be grounded like that, but goes to board as is, and that part is connected to bias supply. Just look at our 2202 for example. It's very similar.

They install 500K pot, leaving 220K on board. This results in 150K resistance. It is no longer stock amp, when you put the pot to full. More important would be to have it stock, when you put it to full, I think? As for ours, we don’t use 500K pot. You can use 220K or 250Ks, to replace the resistors removed. You can put 2.2M safety resistors on the pot, as well but that’s optional."

Does that sound right? Nik knows way more than me, as do you guys... 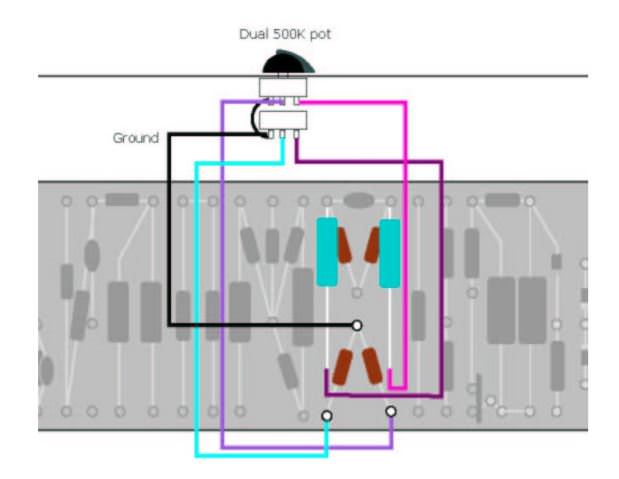 He is correct but even 150k is extremely close in value to the 220k and I doubt you would notice any difference. Both version work well given their limitations but George chooses to use the Rich-mod version in the Metroplex. The most important item when using either of these is the PEC pot. It has very closely matched sections and the taper is excellent I have found.
Top

Hi,
Your advice or comment please.
In the attachment I have changed the LARMAR values to try and get a Loudness effect to try and beef up the sound a bit (Like a loudness effect on old stereos that used tapped pots ) when the control is set low.
Thanks
John

Thanks, danman. Appreciate the feedback. I know George prefers the Rich Mod (w/ PEC) for ease of wiring as an add-on, but I think the Metro-Plex has a standard MV (not PPI).

If this were your amp and you were going to use the PEC pot with either version, would you choose the Rich Mod or Lar/Mar? Thanks again.
Marshall JCM 800 2203x w/ Metro JMP 2203 board w/ Sozo caps, Metro Dagnall Replica OT, and PPIMV.
Top

John...due to security issues a few years back, the forum does not allow images to be posted directly. You must use a photo hosting sight to post pics now.

Drew...I have used both and I really can't tell much difference myself. The PEC pot made a difference as far as a much smoother taper in both version. I would go with the version that makes for the easiest install on your particular board.
Top

Hi, Thanks Danman fro the heads up.
See my previous post.
Thanks
John

Hi,
With ref to my previous post, I wonder if the grid bias resistors feeding the o/p tubes can be reduced to say 100K ohm to get even a more enhanced loudness effect.
I don't know what the minimum loading should be with a 100K/82K plate resistors of the inverter.
The coupling caps could also be increased to say 0.1uF, so at low settings of the MV the load will be 0.1uF loaded by approx 1meg ohm, and at max MV loaded by the 100K ohm.
John
Top

John G wrote: ↑
Thu Jun 21, 2018 12:54 am
Hi,
With ref to my previous post, I wonder if the grid bias resistors feeding the o/p tubes can be reduced to say 100K ohm to get even a more enhanced loudness effect.
I don't know what the minimum loading should be with a 100K/82K plate resistors of the inverter.
The coupling caps could also be increased to say 0.1uF, so at low settings of the MV the load will be 0.1uF loaded by approx 1meg ohm, and at max MV loaded by the 100K ohm.
John

You pretty much need to increase the 0.022uFs with 0.1uFs to replace the bass you lise with smaller grid leak resistors, typical if you swap out the EL34s for 6550s. I think I used 91k last time (cos I had some Pihers of that value floating around).
Neil
Top

Neil,
Yes, that's what I'm alluding to, up the coupling caps (0.1uF) drop the grid resistors to 100k, use a 1Mohn dual gang pot, so the MV fully CW max shunt will be 100K, and with MV near min the loading will be close to 1M ohm.
A 10:1 load ratio.
Did you find this connection helped give the sound more welly at lower settings ?
Thanks
John
Top

I am working on a Plexi 6v6 build using the Hoffman 6v6 as a guide. I would like to add a PPIMV, and I am really impressed with the Rich Mod II PPIMV using a PEC 500K dual ganged pot as used by George Metropolous.

My question is this - on a standard 50 watt plexi, using a Rich Mod II PPIMV, the 220K resistors stay in place on the board and a 500K dual gang pot is used. On the Hoffman 6v6 layout, the board resistors after the caps that follow the phase inverter are 100K. Can I still use a 500K dual gang pot and wire the Rich Mod II PPIMV the same way as on a 50 watt plexi? Or do I have to change anything because the resistors after the phase inverter are 100K on the 6v6 instead of 220K on the 50 watt?
Top

I have only lately begun to try out various master volumes in some select amps. So far I have tried the Lar-Mar in a West Coast mod Super Lead build (dual 250k Alpha pot with 2M balance resistors) and loved it. In this particular amp I actually prefer the sound with the master turned down slightly, which is a happy accident I guess. But I like the sweep and the fullness when turning down, even if NFB is compromised. And full up it sounds exactly like the stock amp.

Next attempt was in a 1970 Super PA that I have modded to '69 Super Lead specs (EL34s) but using the extra preamp tube for a switchable 2203 front end. I tried the standard pre-PIMV as used in 2203 amps but hated that, sounds thin and harsh at anything less than 80%. Next up I tried the Rich Mod 2 PPIMV (dual 500k Alpha pot) and am still not convinced. It has to be said that the pot is not very well balanced, so maybe that influences it, but I thought the Rich Mod sounded a little grainier, brighter (in a mostly bad way) and thinner than the Lar-Mar, and even full up I think it interferes slightly and doesn't sound entirely like the amp does in stock form without a master volume.

So for me the Lar-Mar is the winner so far. But I have two questions;

Return to “Repairs, Restoration and Mods”