Simo is a great band

All about the new Metropoulos plexi for the 21st Century.
Post Reply
14 posts • Page 1 of 1

Simo is a great band

About 2 years ago in this thread http://forum.metroamp.com/viewtopic.php?f=51&t=43851 I mentioned how great JD Simo is and that I wished he would come nearer to me in Houston.

Well this past Tuesday, 02-23-16, the Simo band came to a nice little mostly country venue in Conroe, TX (about an hour outside of Houston) and played before a crowd of about 10 people, 5 of which were the opening band. But this did not matter.

The Simo band knocked me the fuck out. The drummer Adam Abrashoff is a great drummer...a jazz based monster in the tradition of (obviously) Ginger Baker, Cindy Blackman-Santana, Mitch Mitchell, Bill Bruford, etc. The bassist Elod Shapiro is all up in those fat, ballsy, fingerstyle bass tones out of a Fender bass and a Kustom amp and an Acoustic cabinet...definitely influenced by Jack Bruce and Felix Pappalardi and others. He has really creative, improvisational yet accessible and groove oriented bass lines. I hate to compare the band to the obvious influence of Cream, but the three members are in tune with each other in that way...especially in the numbers that allow for more improvisation. That whole aesthetic of having no detectable "leader" where they are all actually playing together and off of each other, never losing the groove. And never boring. They play for themselves, but they aren't totally "Later with the audience". They are very entertaining and accessible. You don't have to be a player to enjoy them. There are really cool songs that I think any audience would dig. It has to be said that J.D. has an excellent singing voice...there is a big Joe Cocker influence and they do their own arrangement of the Grease Band arrangement of "With A Little Help From My Friends". JD can sing his ass off.

I had purchased their new album Let Love Show The Way two days before through iTunes. The album was recorded entirely at the famous "Big House" home of The Allman Brothers in Macon, GA...the first time anyone has recorded there. As I understand it, Skydog's daughter Galadriel let JD use the famous goldtop Les Paul that Duane used often in The Allmans and famously on Layla And Other Assorted Love Songs. Nearly the entire album was tracked with this holy grail instrument. The Let Love Show The Way album is incredible and I urge everyone who loves music to actually buy this album. The songs are really, really good. I love the singing, the melodies, the lyrics...just a really great album. The recording is impeccable...it is as if it is one continuous live recording in a resonant old house. I've recorded in great old live rooms and this is as close to actually being in the room yourself as I've ever heard. The mic'ing, the mixing...everything about the production is hella good.

So I come to JD...as many of the really great guitarists before him, he is devoted to the fans and is super sweet. He talks to and with fans, signs autographs, takes pictures and shares his passion for music and obviously his passion for gear with folks as long as he can. B.B. King and Stevie Ray were similarly fan and audience oriented. He has an endless supply of encouraging words for players and a genuine kindness that can't be faked.

He used a vintage Marshall head and cabinet for this show, but he has a Metro head and cabinet with him which he does use on the road. He had lots of kind words about George as a person and he loves MetroAmp gear to no end. Check out the fantastic clips that J.D. has done with George if you haven't already. Great gear is George's business and passion and J.D. is all about the same.

J.D. is a true gear nerd of course and he does literally whip out all kinds of guitars and sticks them in the hands of fans. He is really anxious to share his love of gear and is not precious about it. There are stories of this that can be seen on the Les Paul Forum and other boards...I can confirm this is all true.

So this happened (as the kids say these days): 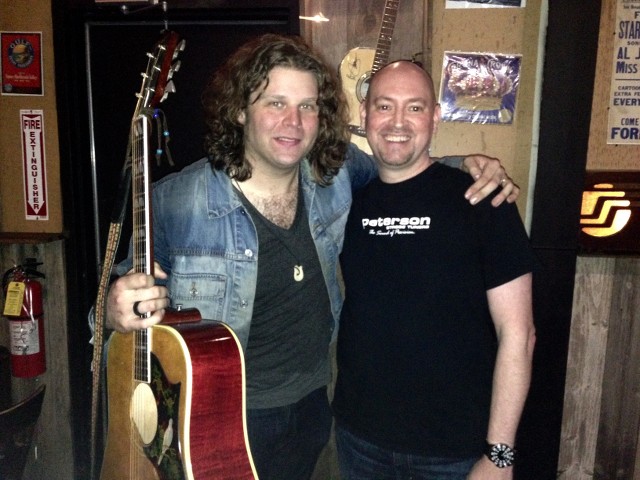 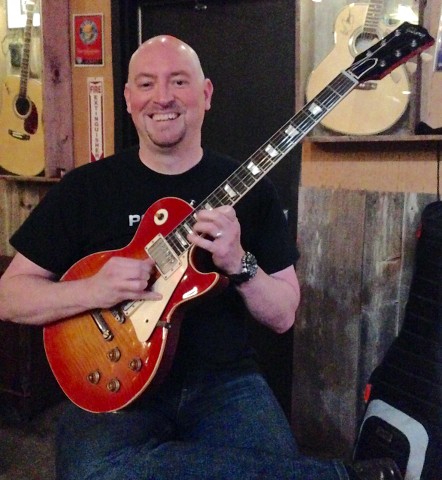 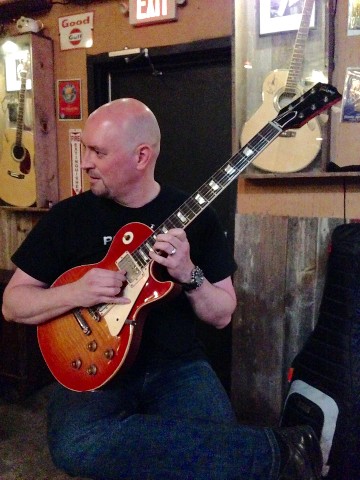 Yes, JD opened up guitar cases for me and another fan. He pulled out the 1960 Gibson Les Paul Standard sunburst. I said "I've never even touched one." He goes "Here!" and stuck it in my hands. I'm not sure if this is "Candy" the burst that JD usually plays, but I think it is. I played the solo to "Whole Lotta Love" immediately...then a little "Lemon Song", some random overbends, a little of "Stepping Out" and "Hideaway". I really bent the dog shit out of the strings. He had a hybrid set of .010 gauge strings on. This was not only the first time I've ever played a real vintage sunburst Les Paul, it was also the first time I've ever played a 1960 profile neck. It was a revelation. I used to play a baseball bat 1988 '57 reissue goldtop and there is no comparison. This guitar was incredibly easy to play in the high register and everywhere else on the neck. As you might expect, it was set up to perfection. Incredibly resonant, smooth as glass. All the frets in all positions were PERFECT, not to high, not too low...no buzz or deadspots anywhere on the neck. Just PERFECT. Just before I handed it back to J.D. I checked the tuning (as many of you know, I'm a super crazy stickler for tuning accuracy) and it was ROCK SOLID! DID NOT WAVER AT ALL. I never really had any experience to judge why bursts are so sought after. I now understand. In the end, they are just guitars and I don't think the prices they go for are justified. But this guitar lived up to and surpassed the hype. As you can see, I was enjoying myself.

Thanks to the band and most of all, thanks to JD for being a lovely human being and a passionate artist. And thank you for giving me my first experience with a real burst. Unbelievably cool. Go see this band and buy their new record. Many of you know I almost always post on this forum about the topic of Eddie Van Halen's playing style and especially the influence of Clapton in the live Cream days on the specific licks that Eddie plays, along with my buddy Bill aka wjamflan. Simo is the closest thing you will ever get to seeing live Cream in their heyday and I just had to share my experience here. It isn't an unusual experience...see this band in person and you will get what I'm talking about.

Damn good review. Thanks for sharing! I haven't checked, but if Simo ever comes to the Kansas City area, I will have to make a point of not missing it. Sounds like it was a killer experience for Marshall/Metro/Guitar fans alike!

Yeah, my ticket was also $10. Please go see them and encourage anyone you know to see them and buy the new CD and any other merch. I bought a t-shirt and I haven't done that in years!
Top

JD is on another level of playing. Standing next to him changed my perspective on guitar playing, no kidding!

His personality and passion for music and gear is so infectious, I wind up standing around grinning form ear to ear. Great for the soul!

Nick Worley from Nashville engineered the record, BTW. Very, very talented in his own right.

george
Check out Plexi Replicas for my personal amp builds...

Thanks for chiming in George. The record is just brilliantly recorded and mixed. When I listened to it the first time I thought "Wow...whoever mic'ed these instruments and mixed this album knows exactly what the hell they are doing!" The room ambience is captured perfectly and everything on the record is an ear candy experience! Nick Worley is clearly on his game!

As I said, J.D. had high praise for you and your gear...all of us do, but I know it is particularly meaningful when a player of that caliber is in your corner. He can make any amp sing but he can make great amps like yours really strike in the guts!
Top

I just saw him play a great 45 minute set in Hollywood, awesome show, great playing and vocals.
He used the Traynor combo for this show. Great guy, too, as you mentioned.
Top

How was the audience attendance?
Top

Hi Allen,
It started out sparse but looked pretty full by the end of his set.
Top

That's great to hear...they are playing in Santa Cruz, CA tonight and I have a buddy there that should be going. They are so great, I just want them to have a good crowd!
Top

Simo is playing in Omaha in a few weeks. The venue is small/intimate, and literally up the street from my house! I'm trying to get my brother-in-law to go, as I'm certain he would dig on what Simo is all about.

The venue may not handle a 100 watt Superlead, but then again he used one in the Basement in Nashville...
Top

Interestingly, it wasn't exceptionally loud. As J.D. mentions in the Rig Rundown clip, he pays so much attention to the details in his guitar and amp setup that the frequencies and the volume end up being a "different kind of loud"...it didn't seem extra loud, just extremely pleasing!

Get anybody you know to go! I guarantee a fantastic show!
Top

He will be in Detroit April 28th...I will be there!

Love the new record! I was listening to it soldering on a Marshall too!!!
Top